(Original post) I built a streaming webcam showing the view from my downtown Oakland apartment in November 2012. I used a Raspberry Pi (Model B Revision 1.0) and the Raspian Wheezy (2012-10-28) image. For the webcam/web server software, I used MJPG-streamer. The problem with MJPG-streamer is that if the images/stream is available on the internet, then anyone can access the software.

Recently my Raspberry Pi began to lose the WiFi connection. In researching various solutions, I disabled WiFi power management on the Edimax EW-7811Un

nano-size USB WiFi adapter. That didn’t solve the problem. I switched to Ethernet but the connection still dropped.

I found a nice script for “Rebooting the Raspberry Pi when it loses wireless connection“. It’s a script that runs in crontab and checks for a network connection by pinging a local address. If the ping fails, it restarts wlan0.

The checkwifi.sh script worked great, but then I had an issue with the video stream image oscillating. The image would continually go between light and dark and the only way to stop it was to restart MJPG-streamer.

I decided to update to the current Raspbian Jessie with Pixel and some other webcam software. The Motion-Project seemed not to difficult – I could use it as a streaming webcam. I decided to use Motion 4.0 and Kenneth Lavrsen’s Motion 4.0 Guide to help set it up. I don’t know if the image oscillation is an issue caused by using the Creative Live! Cam Chat HD

(auto exposure?) but this current setup seems to have resolved the issue. 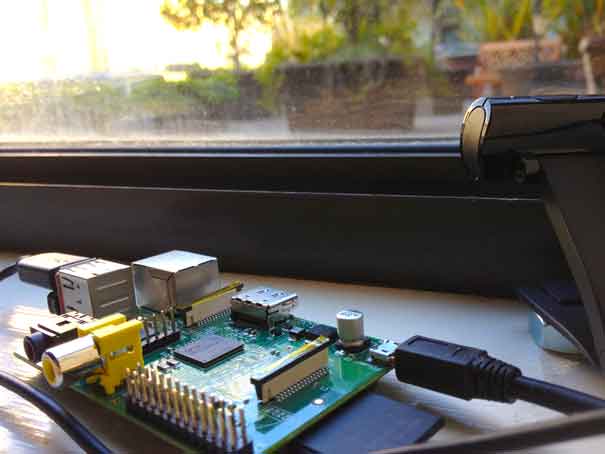 When the Raspberry Pi was released, I thought it would be a great webcam server. I ordered one from Allied Electronics last July, but they never had stock. When Adafruit started selling them, I bought one.

After I acquired a compatible USB keyboard and dug up an Intellimouse Explorer 3.0, I started out with the 2012-09-18-wheezy-raspbian image. Googling found a Romanian site, BobTech, with an excellent tutorial for setting up a Raspberry Pi streaming webcam (English Google translation). Basically, the instructions just worked.

and with the current 2012-10-28-wheezy-raspbian image, WiFi was even easier to setup. The only change I made in the network setup was to give the Raspberry Pi a static IP address so I could find it. I edited wlan0 section in /etc/network/interfaces:

In mjpg-streamer.sh, I set FRAME_RATE=”10″ You really don’t see much action unless it’s windy.

He Was Compared to Tiger Woods. So Why Did He Walk Away From Golf?
Wonders of Street View
The Sierra Club Tries to Move Past John Muir, George Floyd and #MeToo
The Cabinet of Wikipedian Curiosities
2022 Ocean Art Contest Winners
InstructPix2Pix
A Guide to Chinese Regional Restaurants in the Bay Area
Thieves are breaking into Bay Area garages using this novel technique, police warn