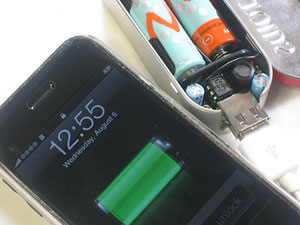 ladyada has updated her MintyBoost battery pack and charger with a higher output step up converter.

She writes, “The upgrade was necessary as the latest Apple products really need a lot of current to charge and hopefully they will work better now!” The MintyBoost uses 2 AA batteries and an Altoids tin for a case.

I’ve built two V1.0 kits and used them to charge a cell phone and my iPod. The MintyBoost is great because it’s small and will give you the additional power to keep your phone or iPod running when you need it.

You can buy the kit and get technical information at ladyada.net

Update: This post is about version 1.1 of the MintyBoost. ladyada has updated the kit to version 3.0.

In high school, I used to love building electronic things. That was so long ago, I was using vacuum tubes to make power supplies.

Once I made an audible tachometer for my car from a schematic in Popular Science. I even thought I wanted to be an EE and started at UC Berkeley in the School of Engineering. After a few quarters I realized that if I didn’t like learning engineering, I probably wouldn’t like doing

engineering. (I think my friend Dan Kalman told me that)
Over the years, I still enjoyed making electronic things. Back in the mid 70’s, I had just moved to New York.

Years later, answering machines had their own call transfer feature.
When Make Magazine started publishing, I became a charter subscriber. The projects they were doing were all the kinds of things that I used to do. One of the projects I saw at the Make Blog, was kit called the MintyBoost, a USB charger designed by ladyada, that fits in an Altoids tin and runs on two AA batteries.

It basically takes the 3 volts from the batteries and boosts it to the 5 volts that USB devices use. Since we have a couple of iPods and cell phone that can be charged with the MintyBoost, I bought a kit.
You can update the v1.1 by adding a resistor.

It’s a great beginner’s kit and easy to assemble. You have to solder the components to the circuit board but you’ll learn basic soldering skills in the process.

The hardest part for me was finding the Altoids gum.

Once you’ve built the charger, you’ll have a something that is useful and may give you the satisfaction of making something yourself. That’s got to be worth something.