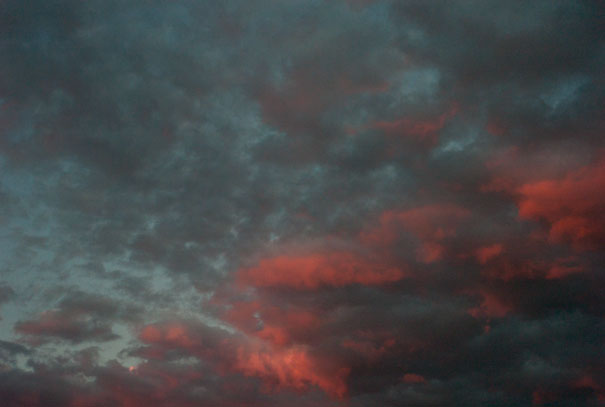 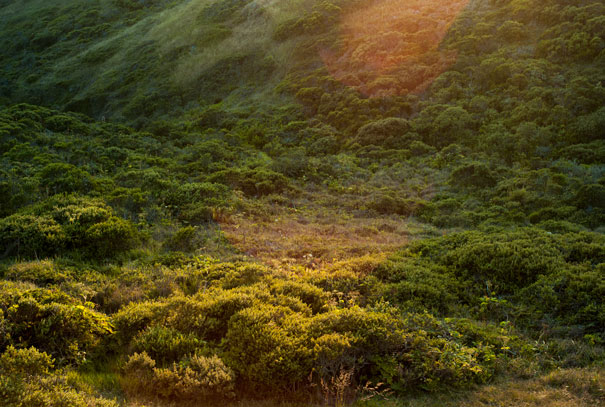 George Black, the author of The Trout Pool Paradox: The American Lives of Three Rivers

, writes about the Shepaug: “In springtime, the river is like the Platonic ideal of a trout stream, as it rushes through places called Steep Rock and Hidden Valley.” 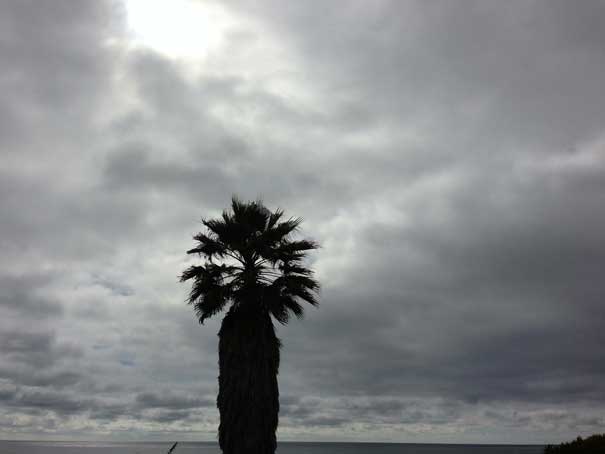 A palm tree, overlooking the Pacific Ocean at Cardiff State Beach, Cardiff by the Sea, California

We got here safely but the trip makes me no longer want to do any air travel. All those airline nightmares you hear about came true for us.

I think we were supposed to leave Tuesday, 6:30 AM. At 4:30 AM, the phone rings and we don’t answer it, because who would be calling at 4:30 AM? Then Chris’ cell phone rings and it’s an automated call telling us our flight has been canceled, tough luck bub. Chris calls a human at Delta; they say tough luck bub. She pretends to cry and says we’re supposed to be at a party at 6:00 PM in Toronto. They say tough luck bub, route us – Monterey (MRY) – Los Angeles (LAX ) – Cincinnati (CVG) – Toronto (YYZ). Our 6.5-hour flight becomes 13.5 hours with a nearly 5-hour layover at LAX. We go back to sleep at 5:30 AM.

After waking up at 9 AM, I start thinking about the 5-hour layover in LAX and I called Brian Baxley to see if he wants to have dinner. He picks us up at the airport and we go back to his house. Their house, inside and out, looks as if they’re very poor.

Brian and Ami treat us to Chinese food in Manhattan Beach. Brian says he brought his Taiwanese clients to this restaurant as a business apology. Epic episodes of Brian stories ensue, a stream of consciousness jumping from one topic hooked to another. Chris wonders how his wife can take it. I guess he can’t be like that with her. Brian and Brandon are going up to Wentworth this weekend.

They drop us off at the airport in Ami’s Lexus and at the curb, he starts telling us the story of how he bought it for $7,000 even though he had already bought another one, then somehow the story morphs into an truncated story of the professor who was selling the first car, then city giving Brian a new battery for his lawn mower.

LAX to CVG is a center seat four-hour flight, midnight to 4 AM PDT. I can’t sleep. The stories of the airlines getting back to profitability are true. I’d say there are 5 empty seats. I thought the plane would be empty. Who wants to go from LA to Cincinnati? A lot of people, apparently.

At Cincinnati airport, our flight lands at a remote terminal, where you have to take a bus to the main terminal. Can’t these guys negotiate a decent landing contract? Who designs these things? The bus to the main terminal looks like a system administrator’s convention – guys in dark pants and sport shirts with phones on their belts. Chris says they look odd to me because these people have jobs.

It’s 7:15 AM in Cincinnati airport and it is busy. We’re walking to our next gate past Brooks Brothers, Johnston & Murphy, Brookstone and a PGA Tour shop. It looks more like Madison Avenue and 44th Street – this is more upscale than most malls.

Our one-hour flight to Toronto departs from gate 49. At the supposed gate, all the doors by the boarding agents’ desks have a letter above them. Once again, I am wondering what the designers are thinking (am I just to fatigued to understand this?) I get an window exit row seat and the flight attendant who greeted me with, “Howya doin? today” (Answer: crappy) asks for confirmation that my exit row seatmates and I understand the responsibility we are taking in sitting in the exit row. I give her thumbs up. She asks me if I understand. I say, “Yes, I understand.” I understand that she has to know that I can understand English commands in case we go down and I have to lift the door out of the way. I understand that I am tired because her airline cancelled changed my itinerary.

At Toronto Airport, we pass through Canadian customs without the agent even looking at me. I smile at him in thanks and it seems that he does not notice me.

Chris and I walk through the terminal looking for the sign for the rental cars that are usually over the entrance to the parking garage. We walk two thirds the length of the terminal to the rental car counters and see there is sign pointing towards where we just came from. At the terminal exit to the garage, across the street, there is a 1.5 inch sign that says “Hertz.” A theme is beginning to emerge.

The Hertz agent asks if we want a Buick or an Impala. I don?t want to drag down the Buick demographic and the Impala is just one ugly motherfucker. I ask if she has any Ford products.

Moments later we?re loading our black Ford Escape. Chris is driving because I figure that she should drive in Canada. She is asked me what I want to do. I tell her we should go to Bass Pro Shops.

I am trying to get the a/c to work. It is hot and humid. Back East kind of humid. Chuck doesn’t know what this is like. He may know hot.
Bass Pro Shops is built in a sprawling mall that seems to be the opposite of ecumenopolis. All those futurists that saw vertical expansion don’t see all this land.

I am disappointed there are no 250 hp bass boats parked in front that I could have my picture taken with. Instead there are a bunch of ATV?s – as Liz says – summer snowmobiles.

Inside, I head for the lures. I think I will be fishing for pike, because that?s what I?ve caught before, but a lot the Internets references pointed to the UK. So I simply by an assortment of hard and soft baits: tubes, worms, jerk baits, spinner baits, buzz baits, crank baits, top water, jigs and spoons.

It is now 16 hours since we left home; with one more stop for groceries before getting to the cottage. Chris is too tired to drive, and I suddenly realize that this was when I really needed the Provigil and I didn?t have it.

As we drive north, it gets darker and darker. The pilot on the Cincinnati – Toronto leg said that a front was probably going to move in around 11:15 am.

In Coldwater, the IGA parking lot is packed, the store not at all. We are too tired to think about a menu for the week but just get a bunch of things.

There are no 8-liter water bottles in the water section but by the register there are two cases four bottles. We pack the groceries in empty boxes and are on the road to the LCBO (Liquor Control Board Ontario) for some beer. I said to Chris that she told me there were no more stops after the groceries.

As we got closer to the cottage, it got darker and darker. I was tireder and tireder. I kept asking Chris if I was still on the road. Then, of course, it started pouring.

The dock on the road side of the river is down a hill that is probably a hundred feet high. Carrying groceries and luggage down a slippery hill to the boat in heavy rain is not something I was looking forward to doing. Add the humidity and the guarantee that I will get at least 5-10 mosquito bites before we leave the dock caused Chris and I talked about driving down to the Big Chute. I could walk 30 feet with everything to a public dock and load the boat. But it was not that simple. She’d have to take the small boat over to the other side and get the big boat (that has a cover), then go down the mile to the Big Chute. I ended up carrying everything down to the dock, cursing and slipping – but I only got four mosquito bites.

Where Is Jazz Most at Home?
Sonny Barger, Face of the Hells Angels, Dies at 83
Watching Baseball with Roger Angell
Controversy Continues Over Whether Hot Water Freezes Faster Than Cold
NASA starts shutting down Voyager after 50 years
Icons of Italian Automotive Style Struggle to Go Electric
APOD: 2022 June 25 - Planets of the Solar System
Star Wars Databank