We bought a Samson C01U

, a large condensor, USB connected, microphone for direct recording to a computer.

The microphone includes a USB cable and a 2.75″ (69.85 mm) table top tripod stand. I recommend a heavy desktop base like this On Stage DS7200B Adjustable Desk Microphone Stand

and the Samson SP01 Shockmount

, which cuts down on vibration when that truck drives by, but makes it look really professional.

It’s pretty much plug and play with Windows or Macs, . (per Samson: “The SoftPre Applet is no longer available, as it is not necessary. The applet featured three options which can be found both in your Operating System’s settings as well as in your recording software.”)

Skype will never sound any better. 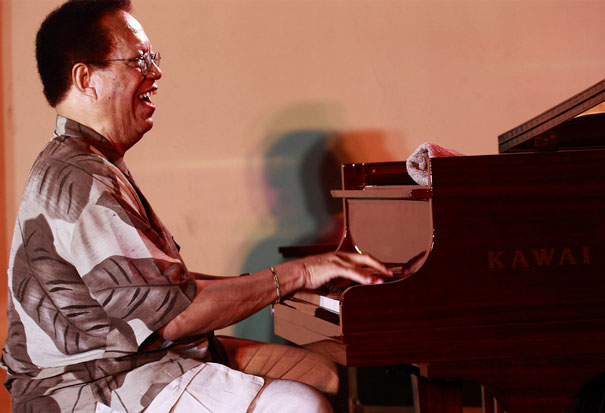 all about jazz has his biography and an interview by Russ Musto.

You can get his Underground Memoirs album somewhere.

The great jazz pianist Oscar Peterson died today. You can read his obituary at the New York Times (free registration required) or the Los Angeles Times.

I only heard him live once, at El Matador on Broadway in San Francisco. Fortunately, we still have his music to remember him.

Trumpeter and composer Wynton Marsalis turned 46 today. I have a faint recollection of complimenting him on his set outside Sweet Basil, (or was it Joanna’s) in the early 80’s. That’s a lot of water under the bridge.

Currently, my favorite work of his is Doin’ (Y)Our Thing, on his album, From The Plantation To The Penitentiary.

I first saw this story on digg.com.

The guys (H3X, bounci.rabbit.123, vettefan, saXas, matthew98, supernatural, and xxDriveNxx) over at iPodwizard.net have re-written the 5G (fifth generation iPod) iPod’s firmware, so it looks like the new iPod Classic’s.

The new iPod Nano and iPod Classic have a new interface. While navigating through the menus, half of the screen is taken up by a floating image of album artwork.

One thing that’s missing on the 5G version of iPodWizard’s hack that the iPod Classic has is Coverflow. Also the images don’t float, like they do on the new iPods, but iPodWizard’s work is very cool, nonetheless.

When I first used the iPod Classic to iPod Video firmware hack, I had the problem of my iPod going into a “Boot Loop” – after the firmware was written, during the reboot, the Apple logo would disappear while the drive clicked and then cycled again.

Putting the iPod into the disk mode by holding select and play allowed me to do a restore to the original (Apple) firmware. Then I downloaded a version of the firmware “without the boot loops.”

ニコン「一眼レフ開発撤退」報道に衝撃と寂しさ カメラ開発の重鎮が語る信頼度「車と交換して！」〈dot.〉
Jacques Pépin, in Search of Lost Cars and Cuisine
The 5 best fly patterns for hopper season
What I'm frustrated by in crypto
Five Minutes That Will Make You Love Duke Ellington
The Bill Russell I Knew for 60 Years
Nichelle Nichols, Lieutenant Uhura on ‘Star Trek,’ Dies at 89
Bill Russell, Who Transformed Pro Basketball, Dies at 88